“I don’t think that he’ll be welcome back at this point if he wanted to come back.”

Penn State Football might have a crisis on their hands. This past week, one of their biggest talents over the past 4 years and starting quarterback-in-waiting, Tommy Stevens, put his name into the transfer portal. While some fans rejoiced at the confirmation that the “much better” Sean Clifford – who has reached demigod status for his 5/7, 2 TD statline last season – was solidified in the starting role for 2019, others asked the more important question: Why is your best player leaving the team so suddenly?

Just the other day after the Blue-White game, James Franklin himself said they were waiting to name a starter until Tommy Stevens was healthy enough to make it a true competition. By Wednesday, Tommy’s name was in the portal and by Thursday his dad was saying “I don’t think that he’ll be welcome back at this point if he wanted to come back.” He also mentioned that the relationship between Tommy and the “Penn State coaching staff” had gradually deteriorated, making him uncomfortable continuing to compete for the starting position.

So that made me wonder if this was normal for a top program. The transfer portal is in its first full offseason of use this year, so it’s relatively new to all of us. Maybe having 19 transfers in a year is normal for a roster of over 100 players. Especially at a top program like Penn State where the environment is hyper-competitive and starting roles are hard to come by. Sure, plenty of guys would want out of that if they don’t make the cut. But 20-percent?

So let’s look at a few of the other top schools that we’d like to be in the same sentence with: Alabama, Clemson, Ohio State, LSU, Georgia. How’s their transfer situation looking? 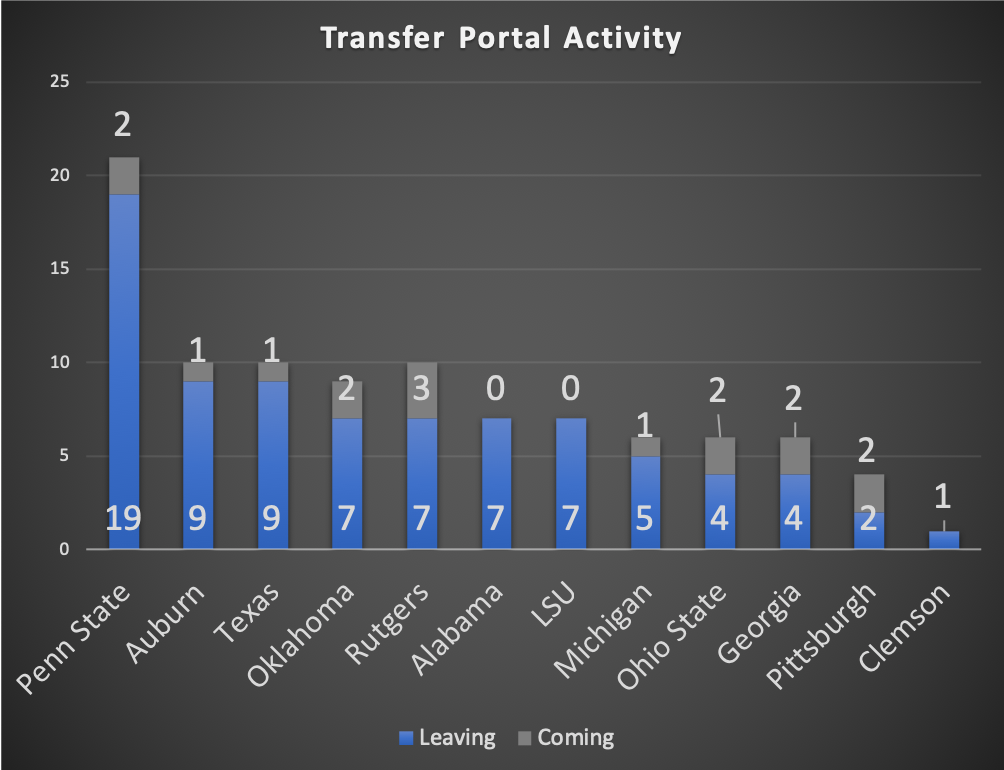 Oh no. That’s not good. Penn State has more than 2x the outgoing transfers as the next closest major program. Not a good sign. I would’ve expected a bit more activity from an Ohio State with a new head coach. It turns out all the truly “elite” programs are run that way and don’t have a lot of locker room turnover, aside from graduating players to the NFL.

I certainly expected more players to leave Pitt. I mean – “Eat Shit Pitt” – right? That’s what we say. You’d think the players would get tired of hearing that. But nope, just two transfers out (offset by two coming in).

Ok, but Rutgers must have more people trying to jump ship than Penn State, right? No? Seriously? I mean, it’s Rutgers. Only seven people want to leave Rutgers early. Heck, three even said “Sign me up!” this offseason. Now I’m concerned.

Now granted, we have to take some of these departures with a grain of salt. Manny Bowen has always been a bum and a traitor, going as far as tweeting and making fun of his former teammates as they lost a heartbreaking Citrus Bowl. He’s been suspended longer than my ceiling fan (bad dad joke).

Then there’s Tommy Stevens. Who can blame him? He’s sat behind one of the most electric QBs in college football for 4 years, patiently waiting his turn, when he could’ve been starting at any Power-5 school. He’s got to do what’s best for him. What is concerning is the quotes above from his dad.

Then, of course, there’s the wide-receiver corp. 6 of the 19 transfers for Penn State were wide-receivers. This was the biggest position unit, followed by the DBs with 5. Now everyone is well-aware of the drops situation this past year, and these players got a lot of shit for it. This likely affected them a lot more mentally than us fans realize. Pair that with a new wide-receivers coach coming in to shake things up, and you can see why a lot of these guys would want a new environment.

So overall, I’d say we have some extenuating circumstances that have driven a high number of guys to part ways with Penn State Football this past season. That being said, every team has their troubles and turnover season-to-season, so that alone isn’t a great excuse. The fact that Penn State is so far out ahead of every other major program is a bit concerning.

It’s something we should keep an eye on. And it may be something that Franklin may need to address down the road, whether it is with the mental toughness of the team or his locker room management style.

For more on the Tommy Stevens transfer, listen to our latest episode of the Staturdays podcast below.

One thought on “Penn State has a Transfer Portal Crisis”